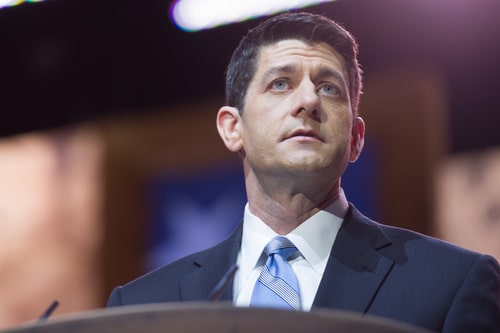 The top Republican in the U.S. House has issued a surprise endorsement of a key marijuana ingredient’s medical benefits as well as the uses of industrial hemp.

“It has proven to work,” House Speaker Paul Ryan (R-WI) said of cannabidiol (CBD) on Tuesday, specifying that it “helps reduce seizures.”

“We do this in Wisconsin,” he said, referring to his home state’s limited CBD law. “That that oil, I think works well.”

The speaker, who is not running for reelection and is retiring from Congress early next year, shared that his own mother-in-law used a synthetic form of cannabinoids, presumably the THC pill Marinol, while dying from melanoma and ovarian cancer.

“That’s off the record,” he said jokingly, referencing TV cameras at the well-attended Kentucky rally where he was appearing in support of Rep. Andy Barr (R-KY), who is locked in a tight reelection race.

Ryan, responding to a medical marijuana question from a woman whose husband passed away, also proactively took the opportunity to speak up in support of industrial hemp.

“And by the way, there’s a lot of industrial uses for hemp that I understand from talking to Mitch McConnell is a big deal to Kentucky agriculture,” he said. “And we’re all in favor of that as well.”

Ryan’s endorsement for hemp comes at a key time. Congressional leaders are currently negotiating differences in the House and Senate versions of the Farm Bill. The Senate proposal contains language championed by McConnell, the GOP majority leader, that would legalize hemp. The House bill has no such provisions.

If the top Republican in either chamber is now vocally in support of ending the prohibition on marijuana’s non-intoxicating cousin, it seems more and more likely that the House will accept the Senate’s hemp language.

That said, don’t count the outgoing speaker as a die-hard marijuana supporter, even when it comes to medical uses.

“Theres no THC in that oil,” he said, even though most CBD preparations do have small amounts of the intoxicating cannabis compound. “That is not medical marijuana.”

In response to the medical marijuana question, Ryan also touted passage this yer of the Right to Try Act—which appears to allow certain seriously ill people to use marijuana and other currently illegal drugs such as psilocybin and MDMA, though he did not mention those implications directly.

Watch Paul Ryan’s CBD and hemp endorsement, in response to a question roughly 21:15 into the video below: