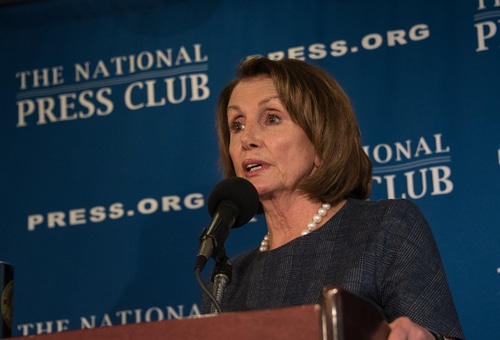 The midterms are over, but Democrats in the House have already found themselves locked in another contentious race that could ultimately have big implications for marijuana legislation in the 116th Congress.

Will Rep. Nancy Pelosi (D-CA) reclaim her seat as speaker of the House? Or will a coalition of frustrated lawmakers usher in a new leader like Rep. Marcia Fudge (D-OH), who has all but confirmed her intent to run for the position?

What’s known at this point is that at least 17 Democratic lawmakers have signed a letter opposing Pelosi’s bid, and a handful of others have made public statements affirming that they plan to vote against Pelosi when the new Congress is seated on January 3.

Here’s a look at where Pelosi and Fudge fall on marijuana issues:

Looking at voting records, Pelosi cosponsored a number of marijuana bills in the 1990s and early 2000s—including several to protect states that legalized medical cannabis from federal interference—but she hasn’t signed her name onto a single piece of standalone marijuana legislation over the past 17 years.

Although Pelosi started cosponsoring fewer bills in general after being named House speaker in 2007 and in her post-speakership years, she’s still put her name on dozens of pieces of legislation during that time—though none are related to marijuana.

Fudge, meanwhile, has been ramping up her bill cosponsorships when it comes to cannabis reform. Over the past two years, the former chair of the Congressional Black Caucus (CBC) signed on to a bill that would end federal marijuana prohibition and a resolution acknowledging the failures of the war on drugs, for example. Prior to the current Congress, though, she hadn’t signed onto any cannabis bills since first joining the House in 2008.

Aside from the issue of proactive bill sponsorship, both Pelosi and Fudge have consistently voted in favor of floor amendments to protect legal medical and adult-use marijuana states, allow Department of Veterans Affairs doctors to recommend cannabis to patients, allow industrial hemp and expand access to banking institutions for marijuana businesses.

Both congresswomen have received “B” grades from NORML.

“Looking at the conversation of Democratic leadership right now and how the speaker vote is set to go, I would suspect that Pelosi is going to be elected to be the speaker for the 116th Congress,” NORML political director Justin Strekal told Marijuana Moment.

“Nancy Pelosi has demonstrated herself to be a very effective leader of the Democratic Caucus and was instrumental in ensuring a favorable vote outcome for the first time that the [Rep. Dana Rohrabacher (R-CA)] language was passed on the House floor in order to restrict the Department of Justice’s ability to enforce federal prohibition against the states that have legalized medical marijuana programs. Her operation has been engaged with—and in regular talks with—our champions of the Cannabis Caucus and members who are supportive, and we have every indication that we will have her full support in moving legislation forward that would end federal prohibition.”

Where the two Democratic lawmakers seem to diverge is in public statements about cannabis reform. For example, Pelosi has talked about marijuana (and yoga) as a safer alternative to opioids and she pushed back against former Attorney General Jeff Sessions’s decision to rescind an Obama-era marijuana guidance policy.

“Congress must now take action to ensure that state law is respected, and that Americans who legally use marijuana are not subject to federal prosecution,” she said in a press release earlier this year. “Democrats will continue to insist on bipartisan provisions in appropriations bills that protect Americans lawfully using medical marijuana. Congress should now consider expanding the provisions to cover those states that have decriminalized marijuana generally.”

“Pelosi has been a solid ally on drug policy reform,” Michael Collins, interim director for the office of national affairs at the Drug Policy Alliance, told Marijuana Moment. “She has voted for many marijuana reform amendments, been a tough negotiator on numerous appropriations issues, has fought against regressive drug sentencing proposals like [Stop the Importation and Trafficking of Synthetic Analogues Act].”

“Crucially, her staff have always been available, willing and ready to advance drug policy reform,” he said.

Fudge, meanwhile, has been relatively quiet on the issue in spite of her recent support for reform legislation. And she doesn’t seem to have weighed in on Ohio’s unsuccessful 2015 legalization ballot measure.

For all of Pelosi’s talk and votes on cannabis reform, though, she was noncommittal when asked in September whether she planned to bring marijuana bills to the floor in 2019 if Democrats retook the House.

“Well, the marijuana initiatives have received bipartisan support on the floor of the House,” Pelosi said. “I don’t know where the president is on any of this. So any decision about how we go forward would have to reflect where we can get the result.”

Another Ohio Democrat, Rep. Tim Ryan, is reported to be floating another run for the speakership after losing to Pelosi for Democratic leader in 2016. Ryan said that he was initially reluctant to get behind marijuana legalization but, after witnessing the harms of prohibition, he wrote that cannabis “should be legal in all 50 states.”

The current chair of the CBC, Rep. Cedric Richmond (D-LA), is another potential contender for the position. Under Richmond’s leadership, the CBC has called for the end of federal marijuana prohibition and released a bill in May that outlined several wide-ranging reform proposals such as removing cannabis from the list of federally banned substances.

Rep. Hakeem Jeffries (D-NY) is reported to be laying the groundwork for a future House speaker run, starting with a bid to become the next House Democratic Caucus chair, Politico reports. He’s a strong proponent of marijuana decriminalization. “The connected and powerful—including many in high political office—have frequently admitted to smoking marijuana when they were young,” Jeffries wrote in a 2012 editorial for CNN. “We didn’t unmercifully penalize them. We should stop needlessly criminalizing tens of thousands of our young people for doing the same thing.”

Then, of course, there’s Rep. Barbara Lee (D-CA), one of the most vocal advocates for cannabis reform on Capitol Hill for years. She’s also currently running to become the next House Democratic Caucus chair, though a sizable following of supporters are pushing her to compete against Pelosi in the speaker race. This year, Lee has introduced legislation to protect legal marijuana states and also promote diversity in the burgeoning cannabis industry.